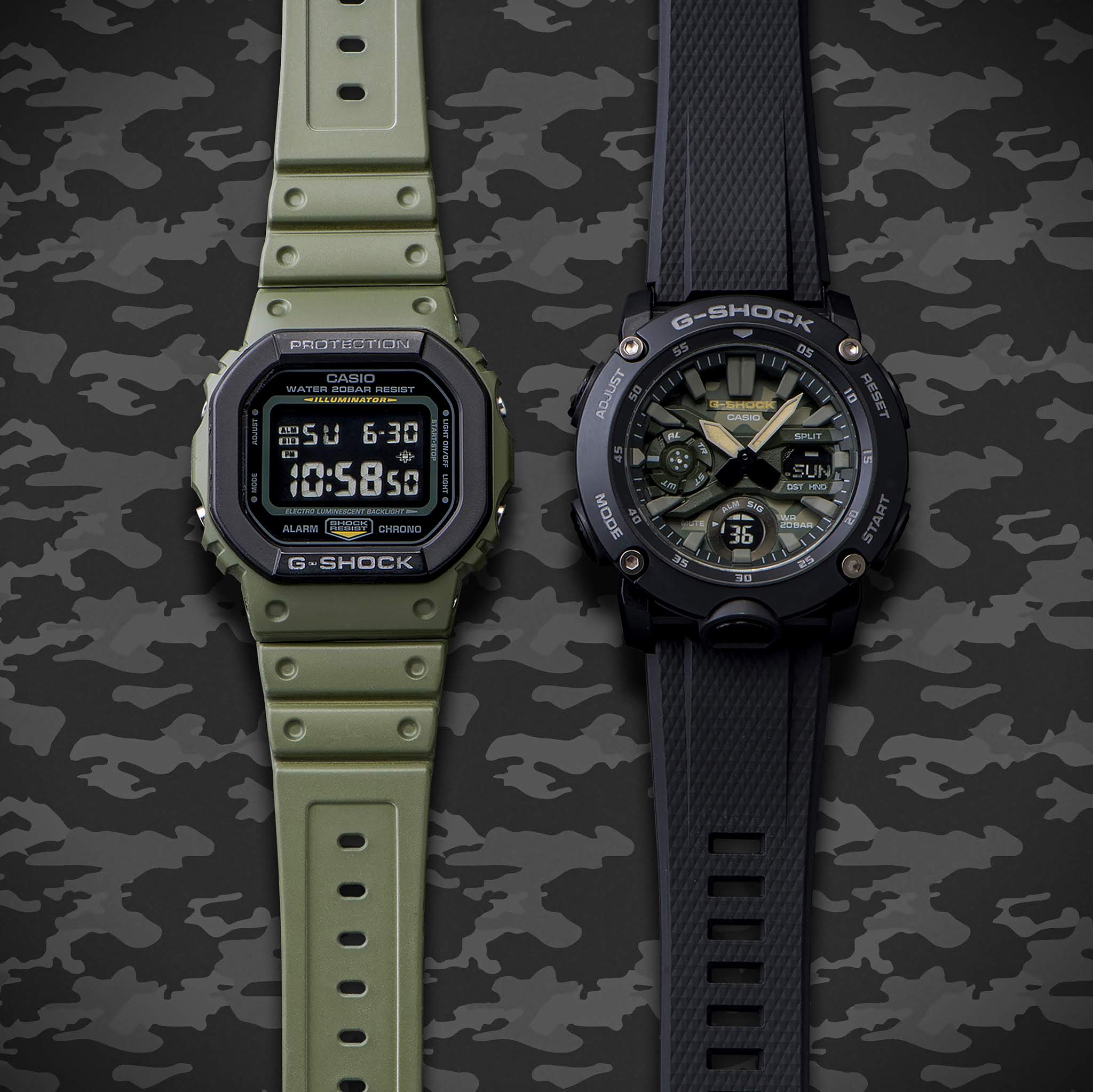 
DOVER, NEW JERSEY, March 11, 2020 — Today, Casio G-SHOCK unveils the new Street Utility Military Series, which features a line-up of men’s DW5610 models in utilitarian colorways and a new layered bezel structure to enhance their overall strength and sophisticated street style.
The models of the Street Utility Military series boast unique color combinations through their new layered bezel structure. The new structure is developed through a two-part molding process which creates a separate top and base to further enhance the strength of the bezel. The DW5610SU-3 features a military green band and black watch face, and the DW5610SU-8 arrives in a gray band and black face.
The new series comes in the classic DW5600 square shape and features the staple functions such as a built-in EL backlight and Flash Alert.
Also being released within the Street Utility Military Series are two updated GA2000 timepieces, tying back to the collection with unique green and blue camouflage faces. The GA2000SU-1A/2A feature the classic circular shape of the GA2000 with large side buttons, a Carbon Core Guard Case and Super LED Light, as well as the detachable band structures.
The Street Utility Military models come equipped with G-SHOCK technology including:
The DW5610SU-3/8 models will retail for $110 each, and the GA2000SU-1A/2A will retail for $130 each. All timepieces will be available for purchase this month at G-SHOCK retailers including Macy’s, the G-SHOCK Soho Store, and gshock.com.

About G-SHOCK
CASIO’s shock-resistant G-SHOCK watch is synonymous with toughness, born from the developer Mr. Ibe’s dream of ‘creating a watch that never breaks’. Over 200 handmade samples were created and tested to destruction until finally in 1983 the first, now iconic G-SHOCK hit the streets of Japan and began to establish itself as ‘the toughest watch of all time’. Each watch encompasses the 7 elements; electric shock resistance, gravity resistance, low temperature resistance, vibration resistance, water resistance, shock resistance and toughness. The watch is packed with Casio innovations and technologies to prevent it from suffering direct shock; this includes internal components protected with urethane and suspended timekeeping modules inside the watch structure. Since its launch, G-SHOCK has continued to evolve, continuing to support on Mr. Ibe’s mantra “never, never give up." www.gshock.com.